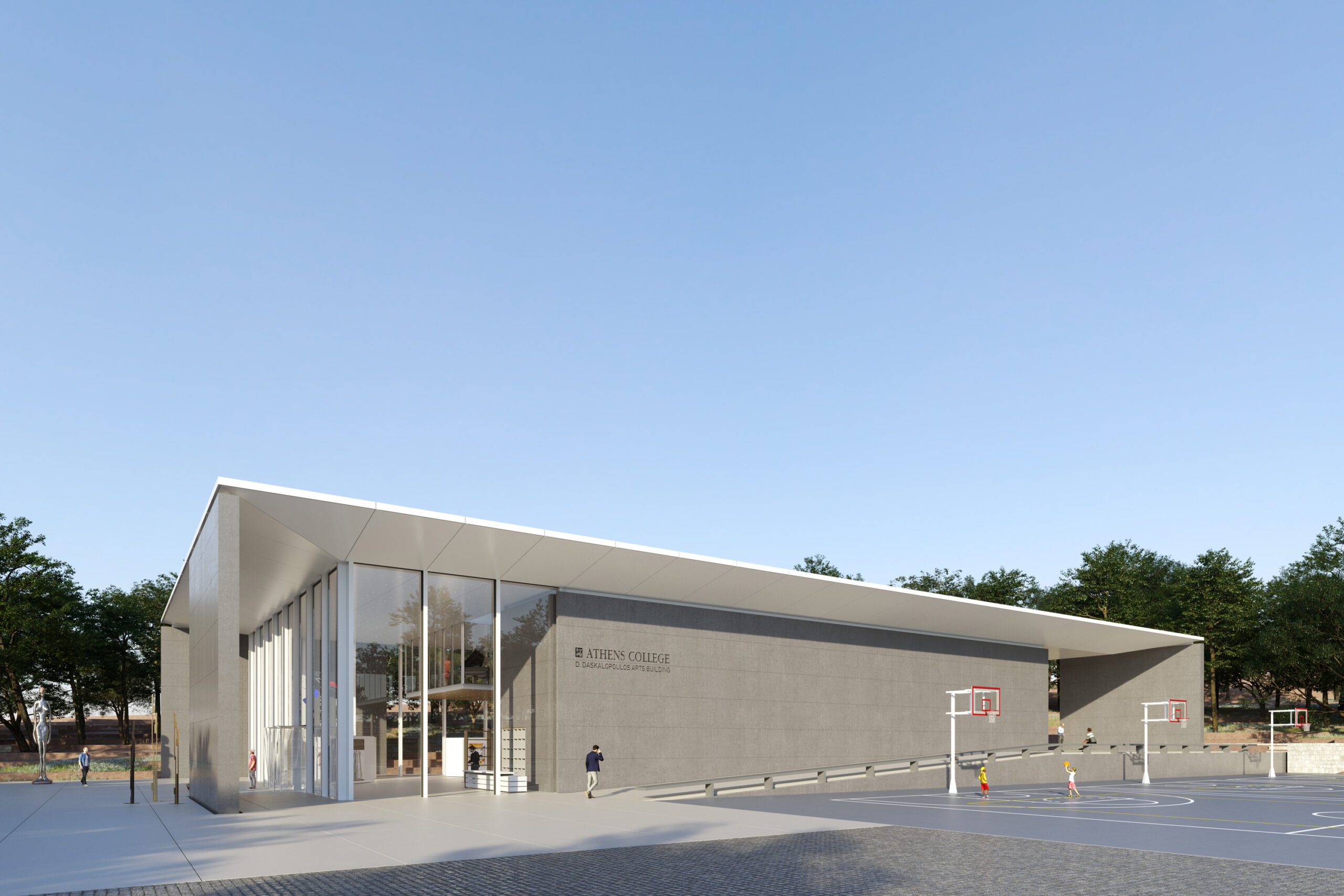 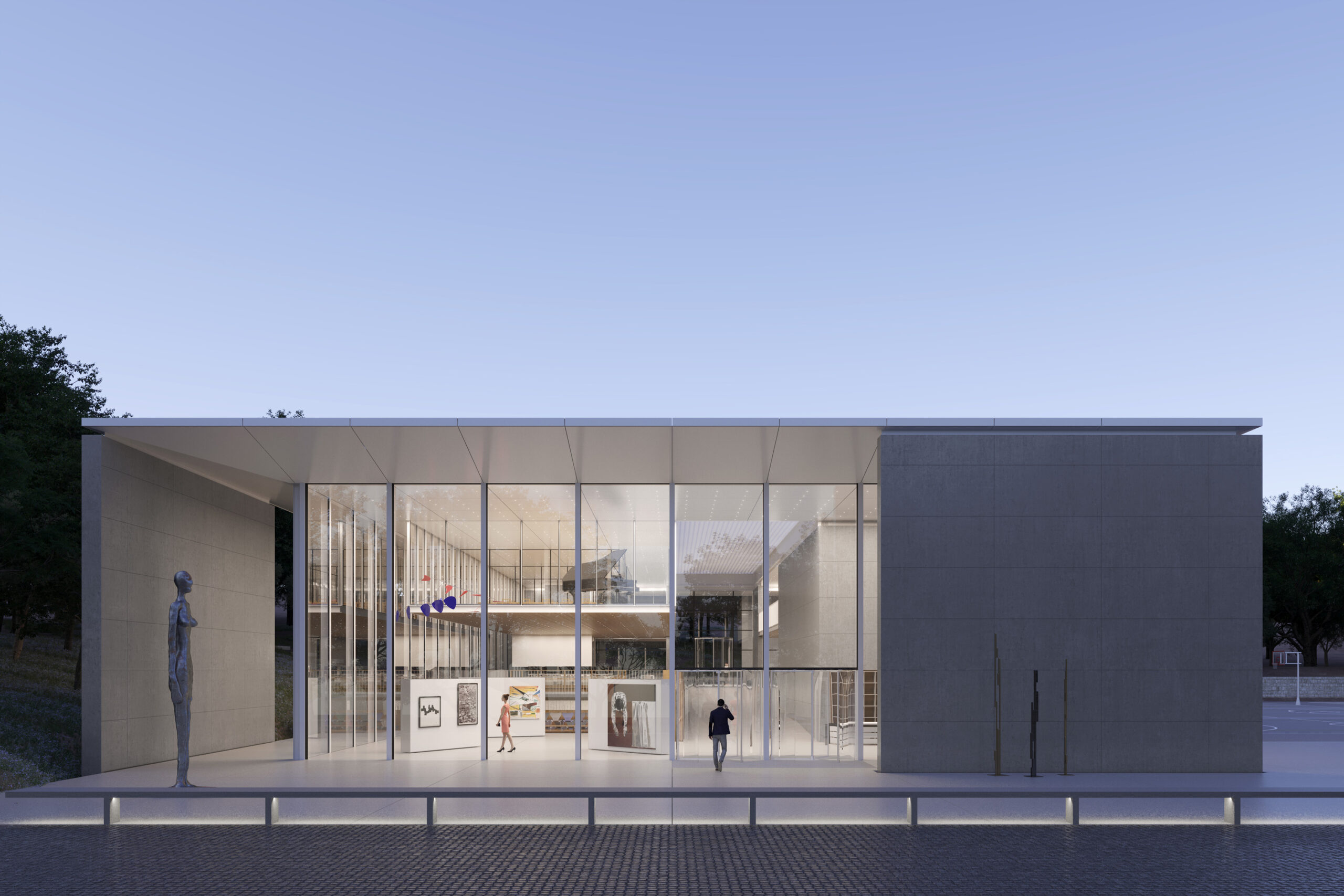 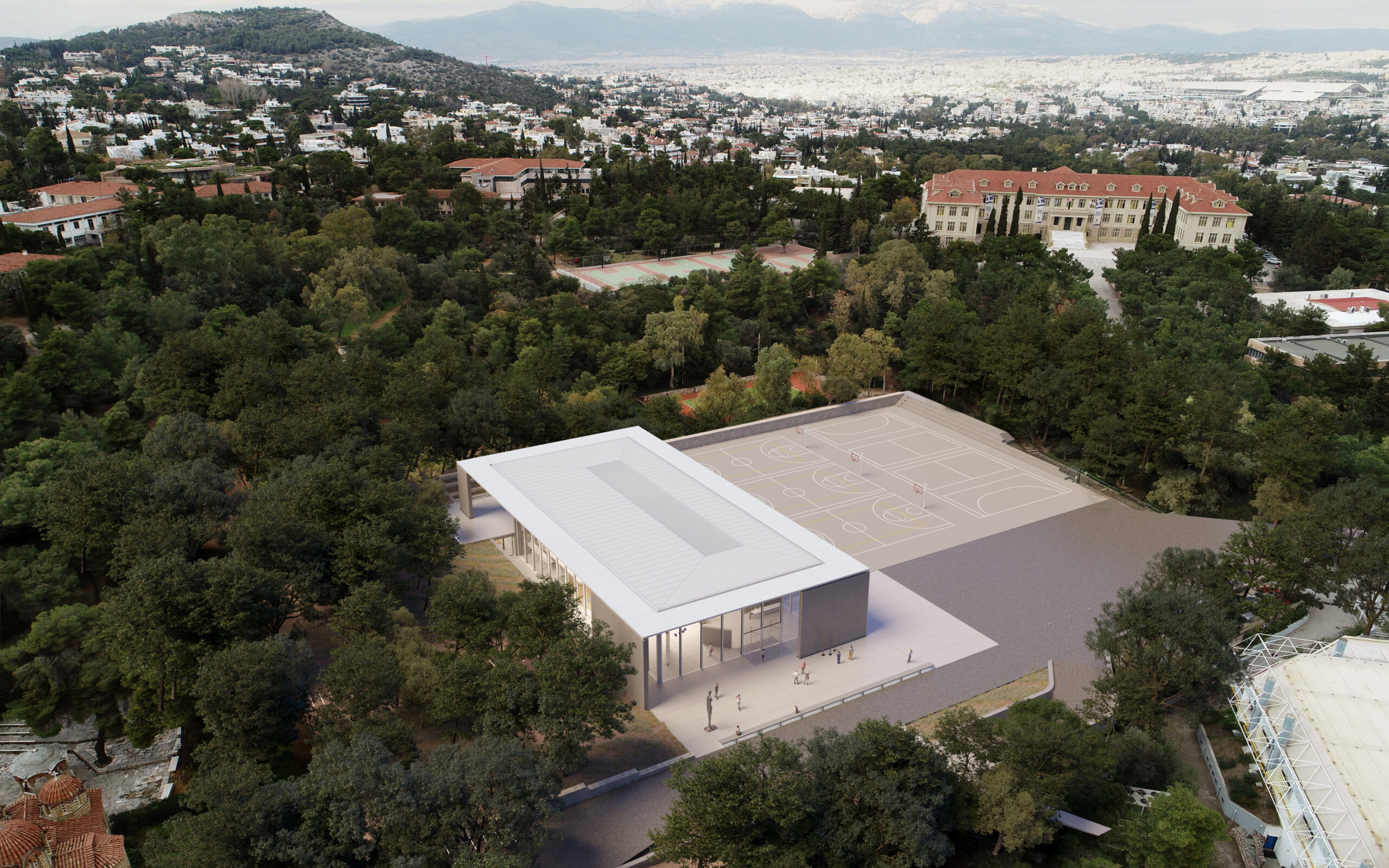 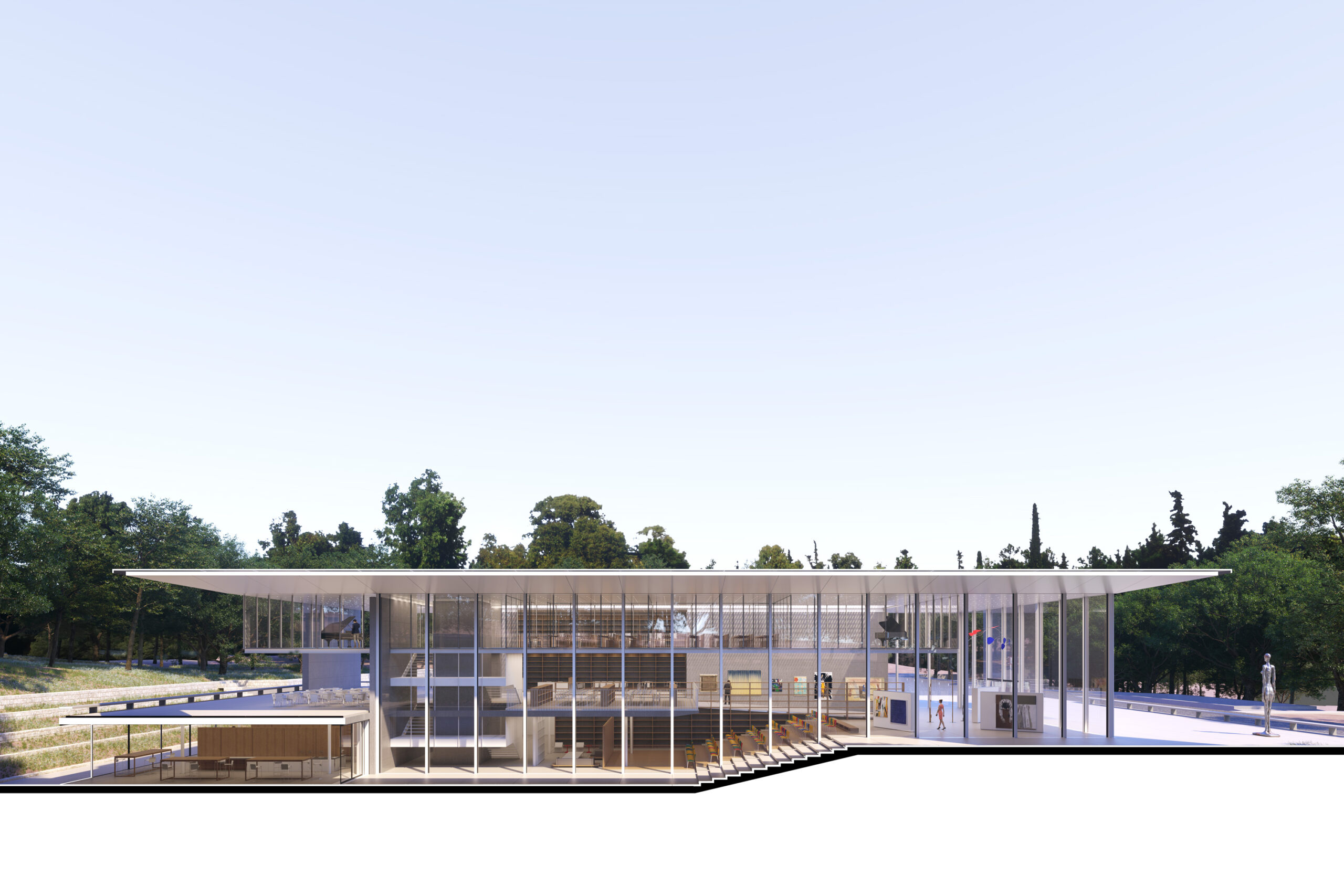 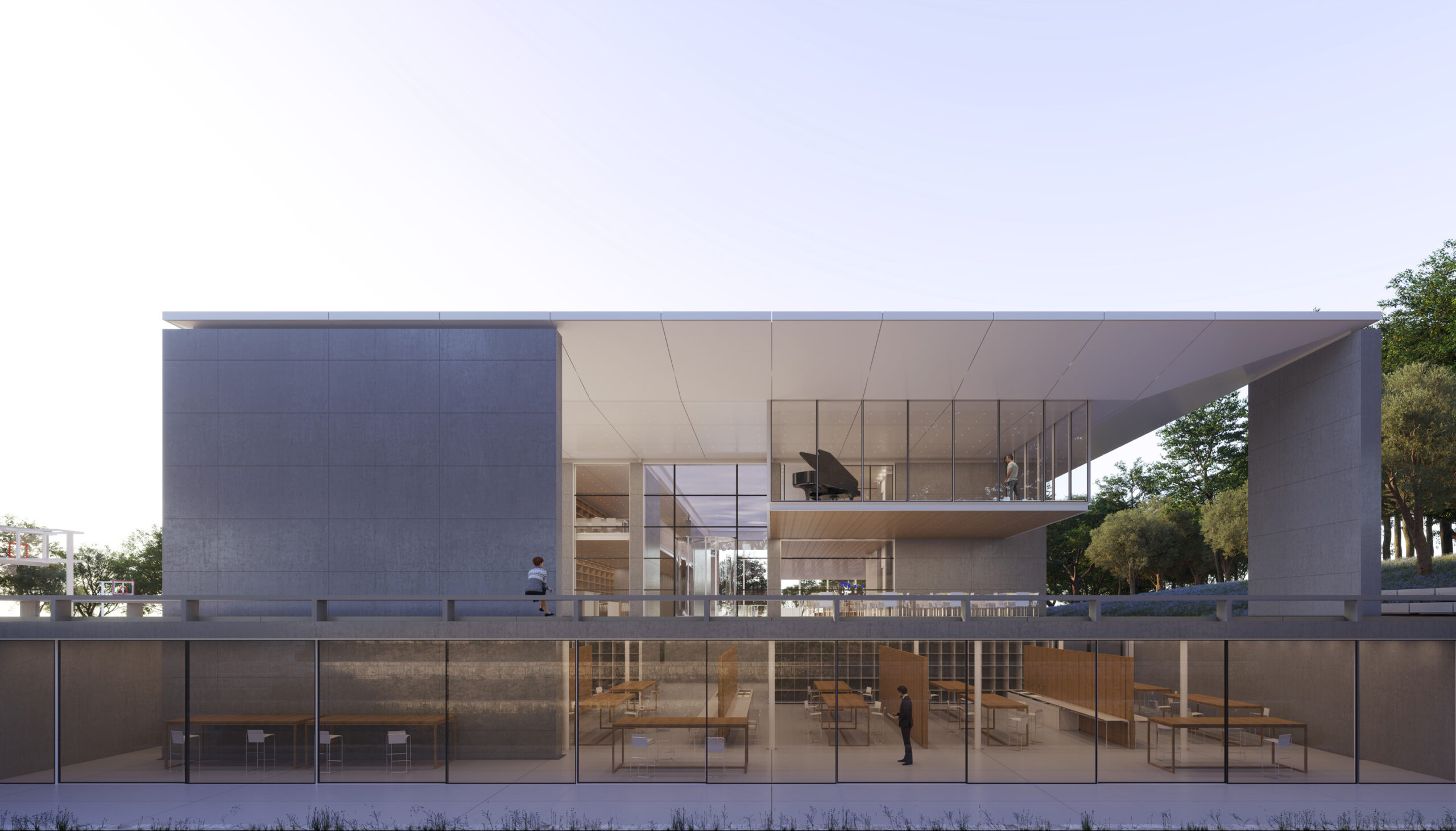 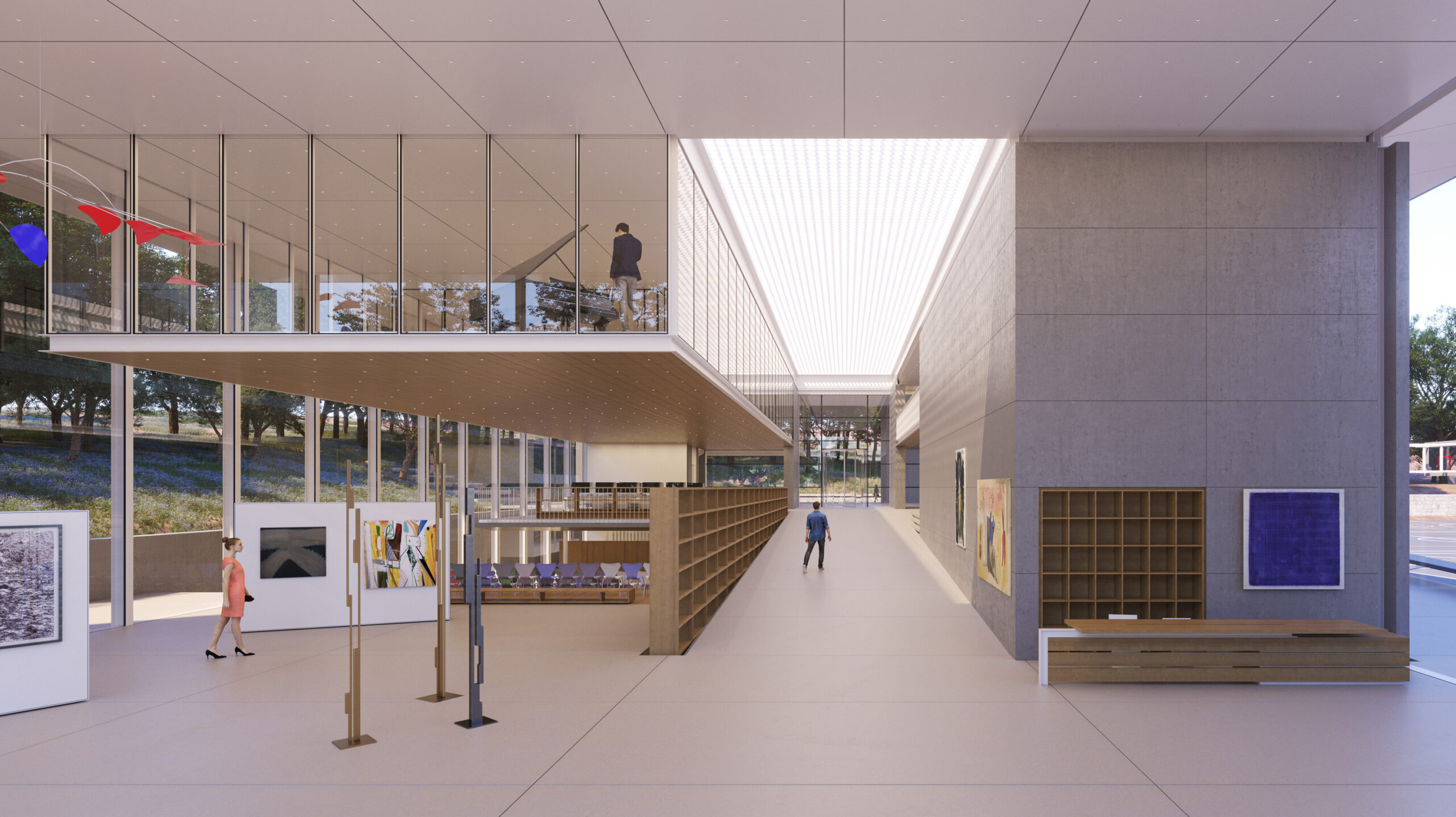 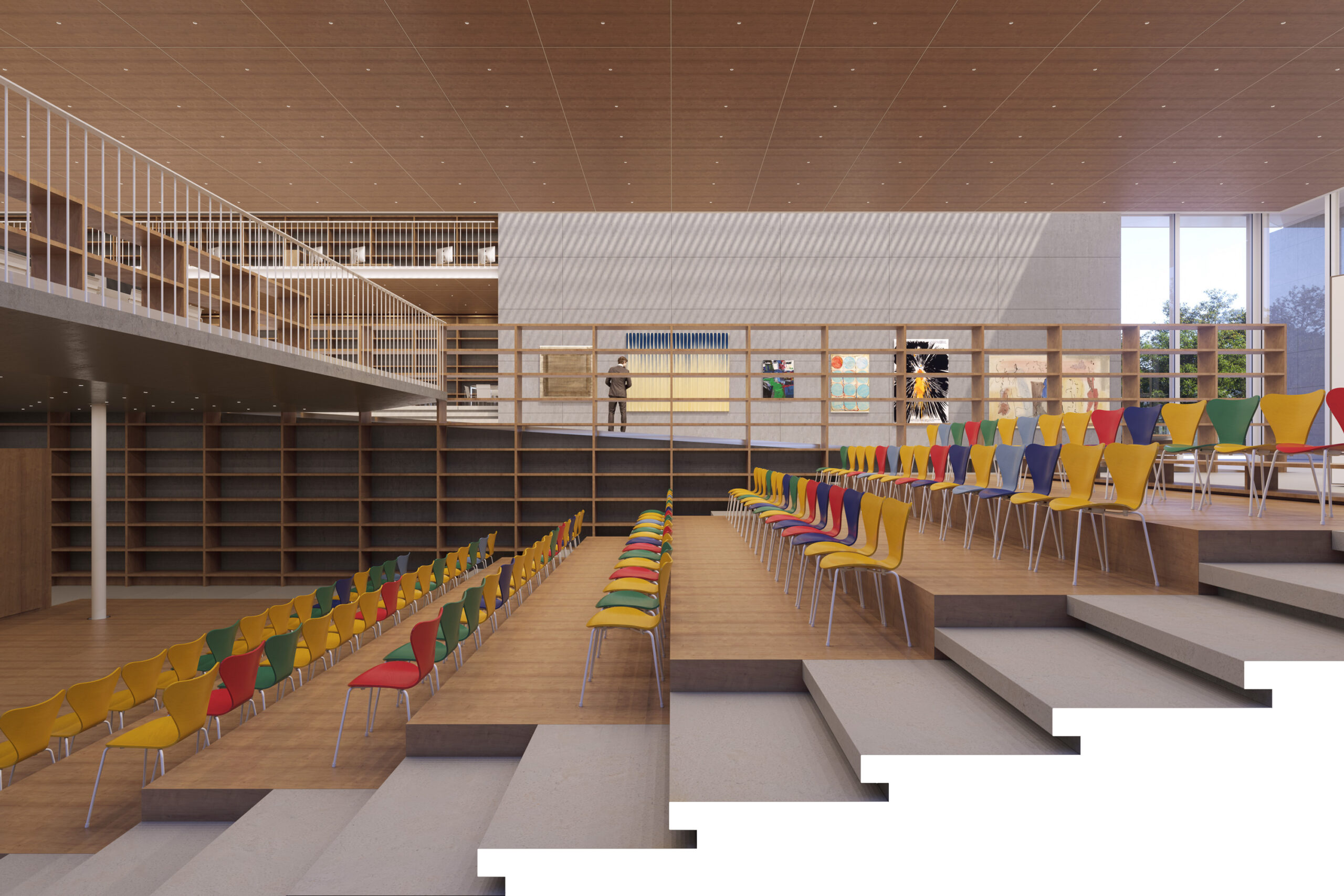 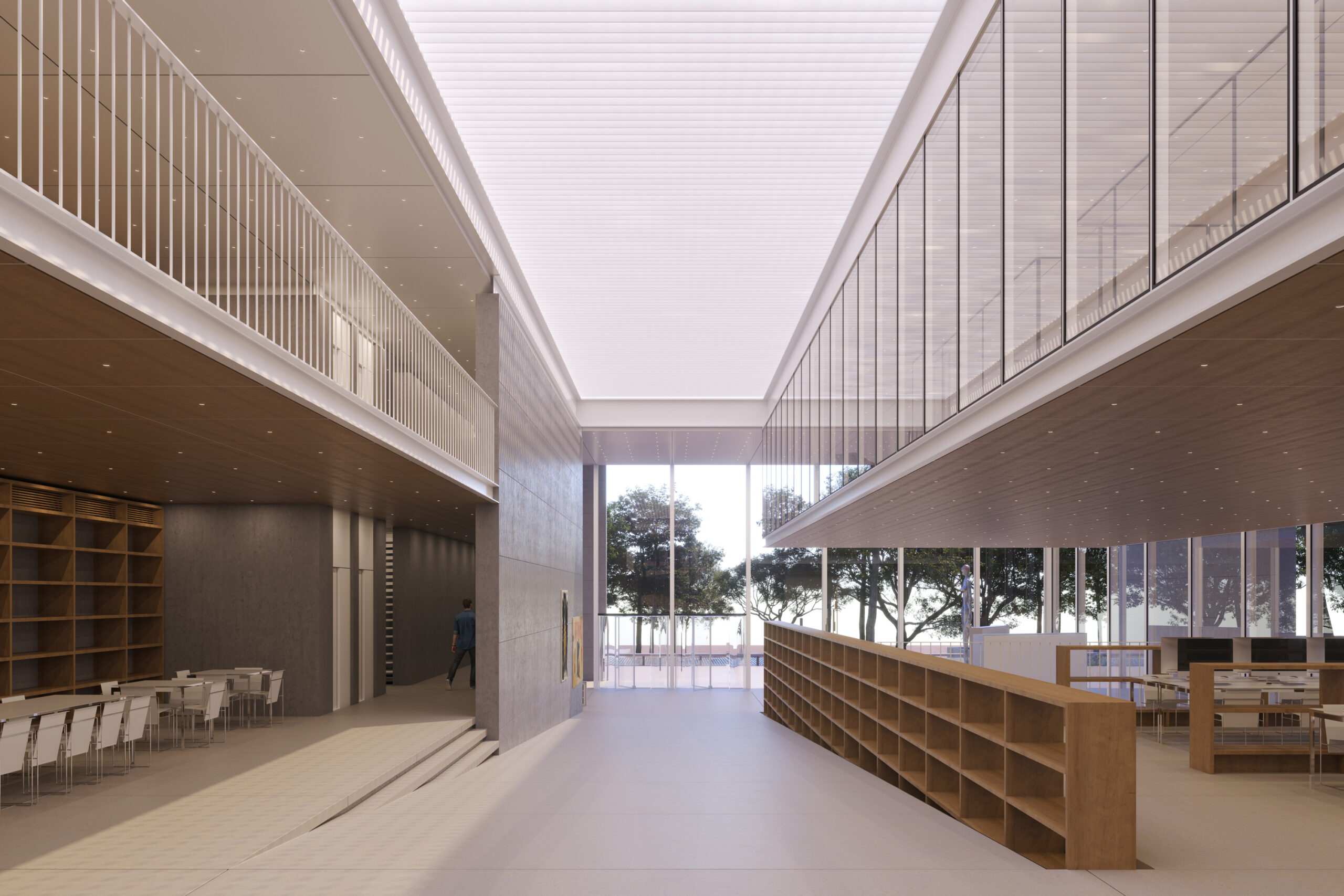 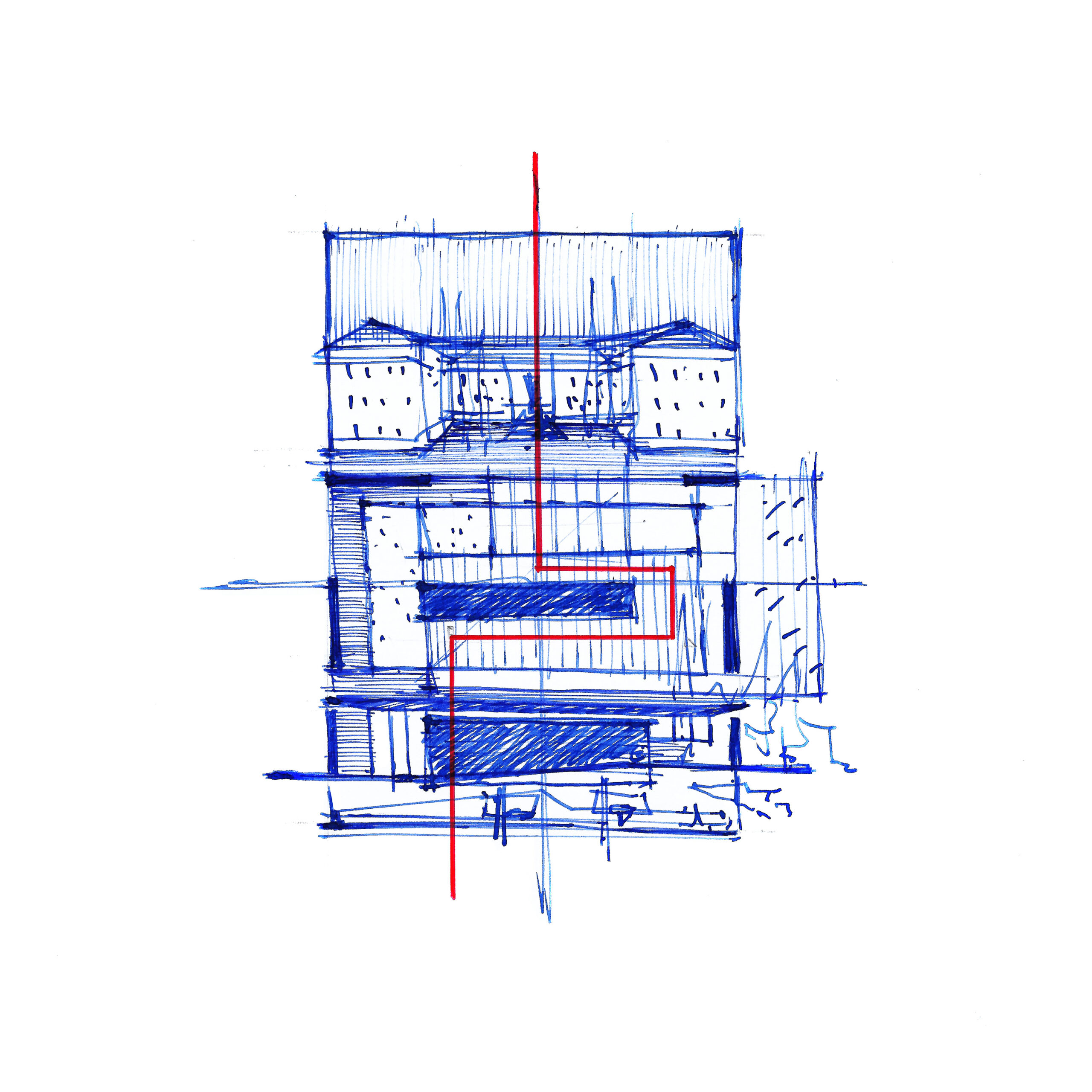 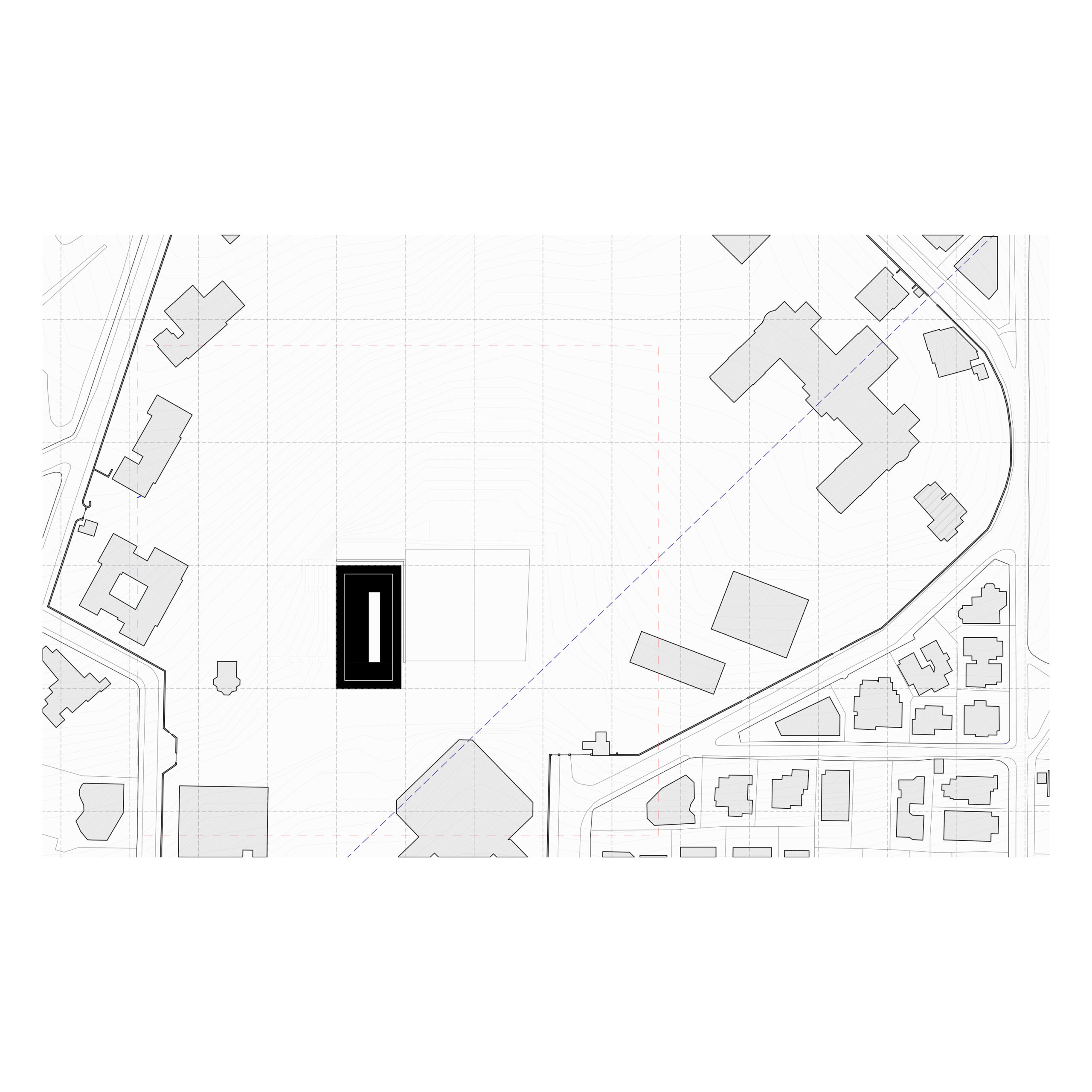 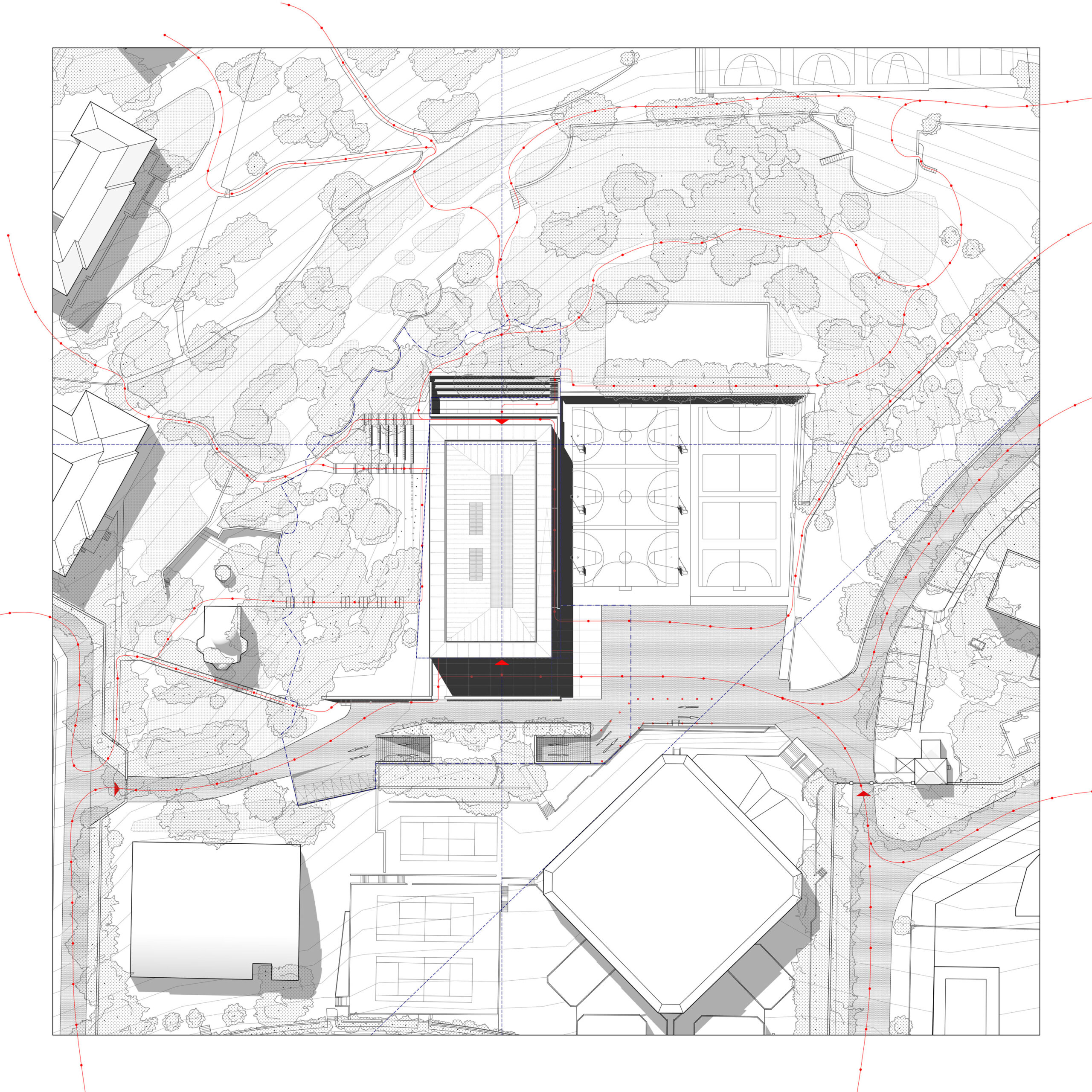 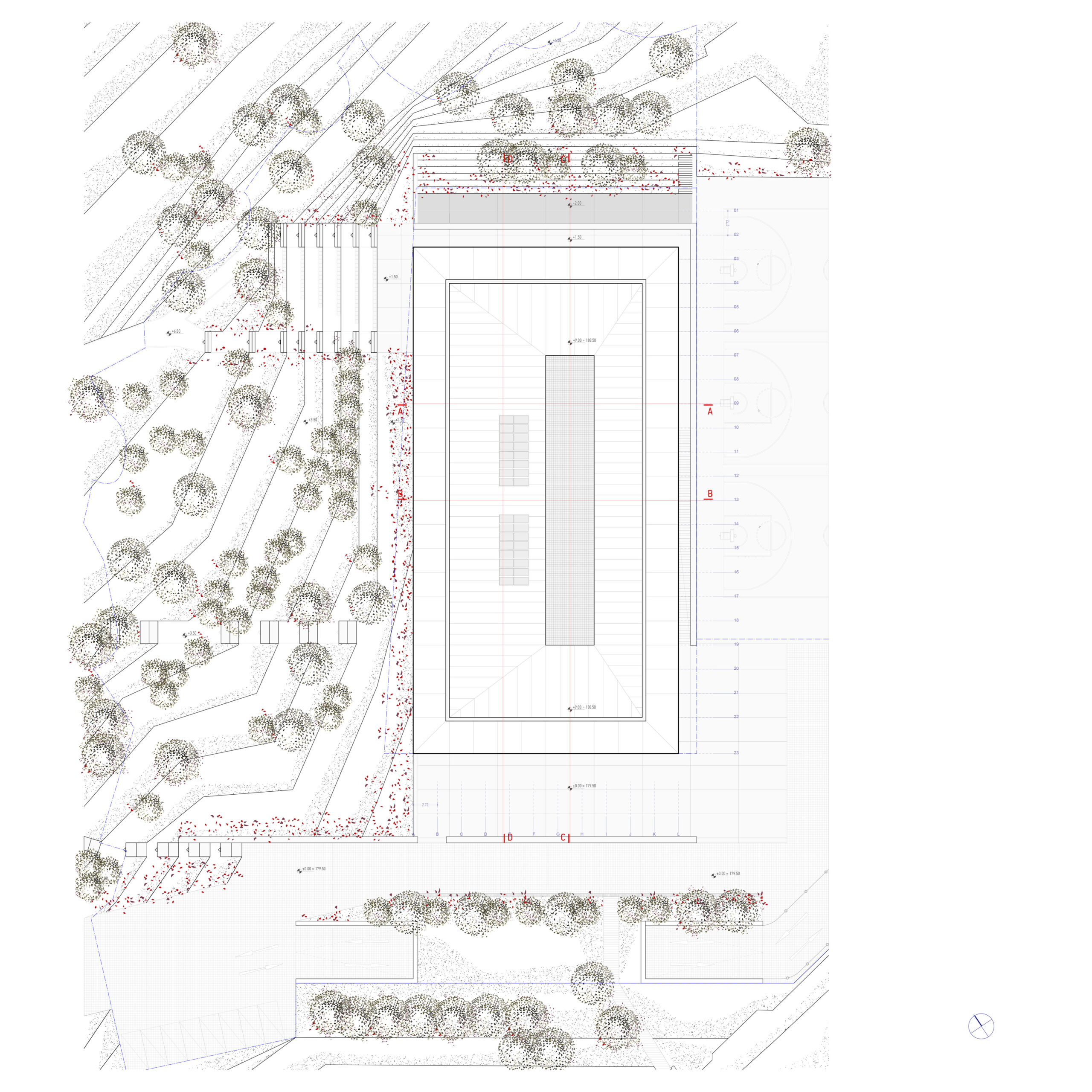 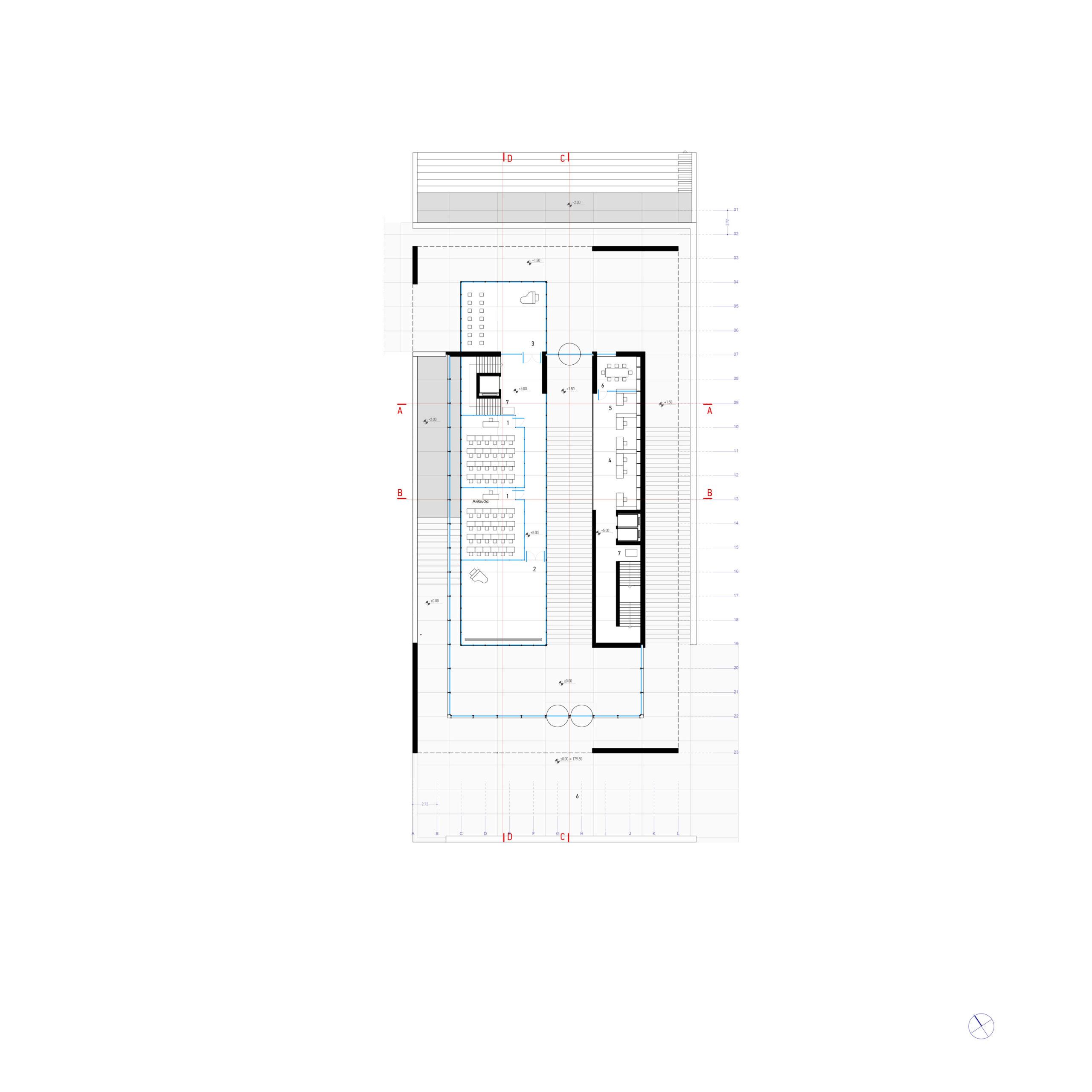 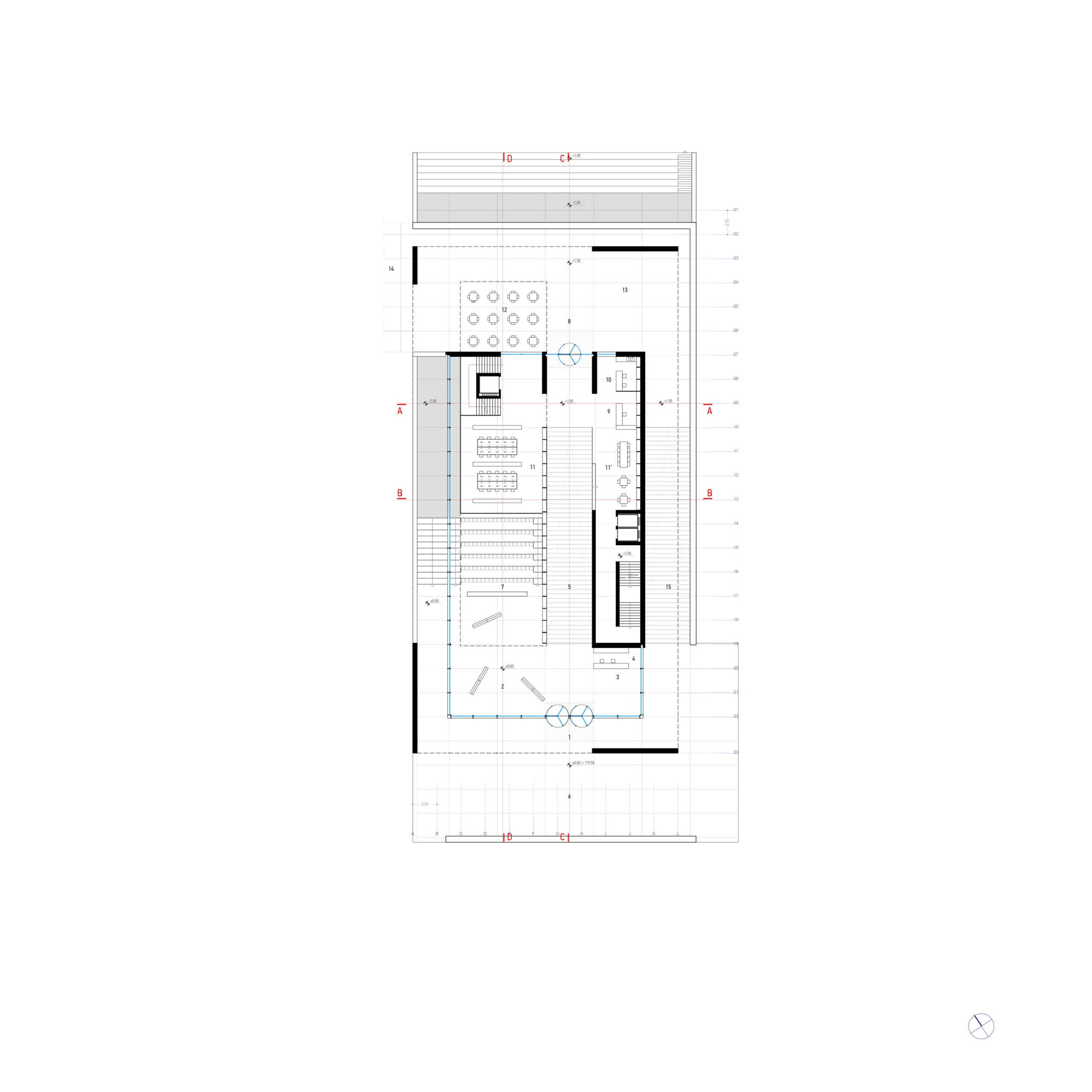 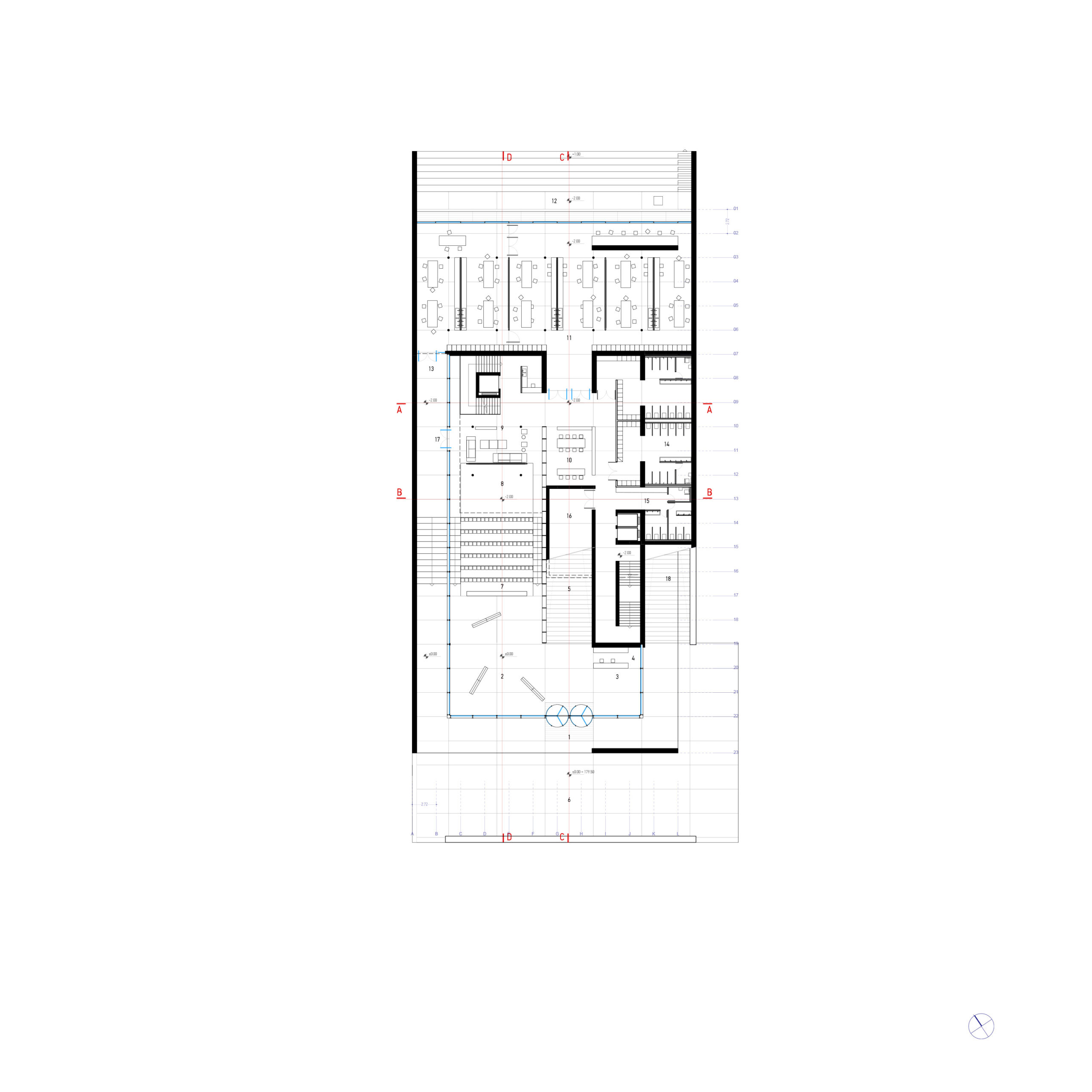 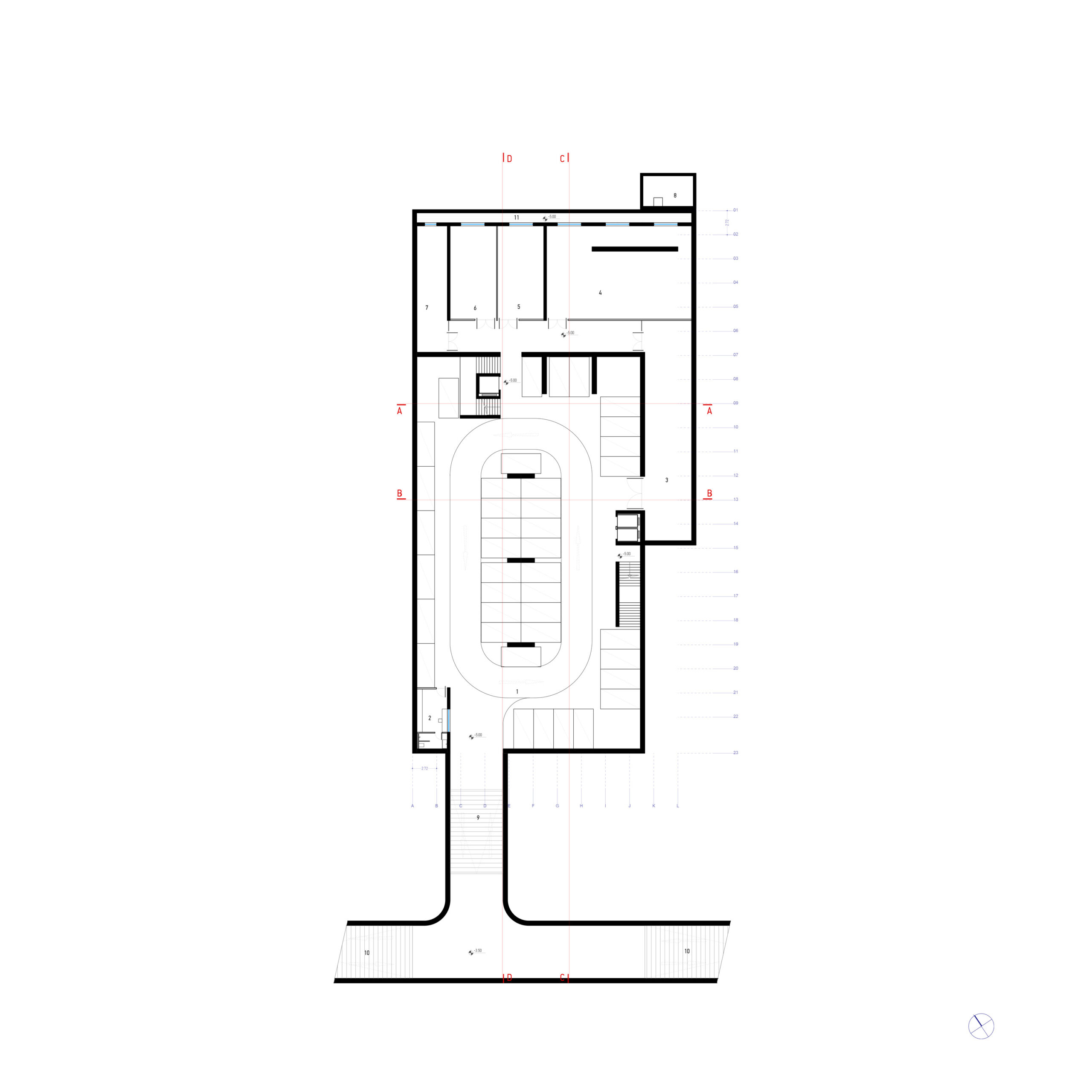 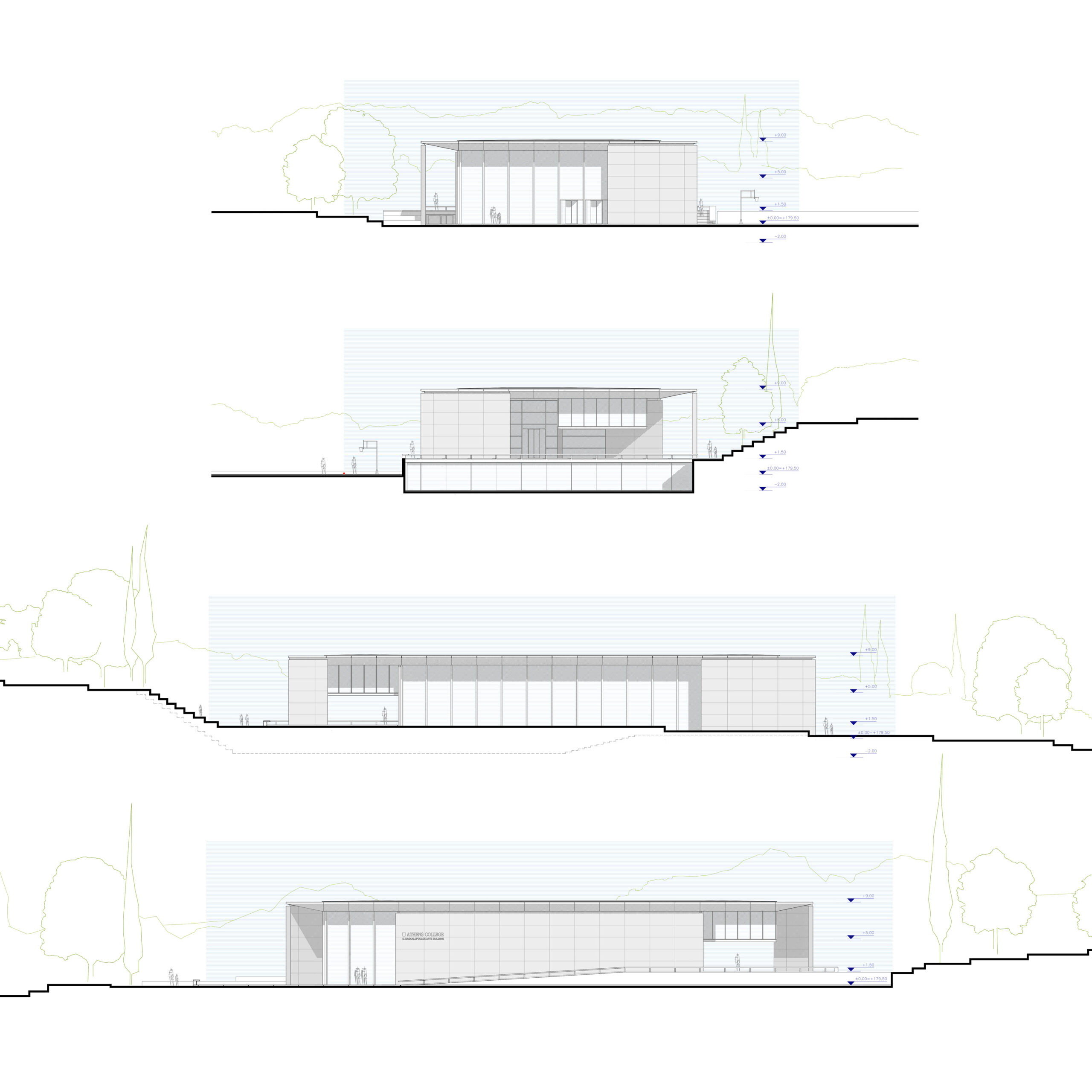 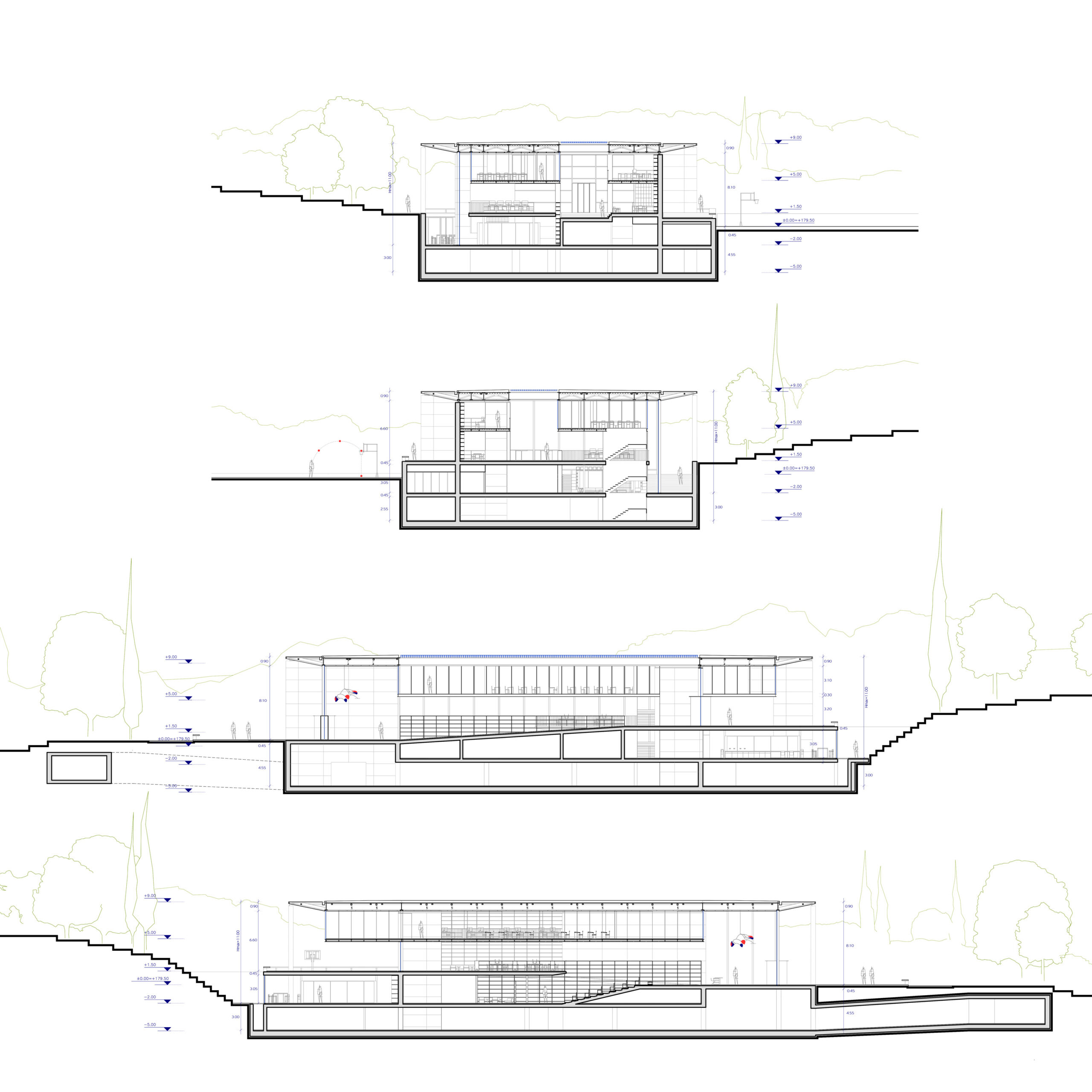 Moved by the existing Educational Building (Benaki Hall) inherent qualities we propose a floating canopy to house inside one ‘topos’ two distinct functions with dynamic boundaries while users enjoy views to surrounding landscape and bathe into Attican Light. The New Building of Arts D. Daskalopoulos, interweaves the Educational and the Exhibition Center boundaries which are evolving perpetually over time; winding around each other and with the surroundings into a harmonious symbiosis.

A ‘floating’ roof, ‘preexisting’ on the location, defines ‘topos’ in-between sky and soil. This ‘topos’ offers a multiverse hands-on experience, for the surfacing new creators. Transparent partitioning fuses and liquifies inner and outer limits allowing Attican Light and adjoining nature to become one entity as seen from within. The scope of the competition regarding the new building on the premises of the Campus of Psychiko, property of Hellenic-American institute of education, is a modern type of educational facility combining art with learning, envisioned together. The building under proposal, creates a room to maneuver on discussion for the foundations of education itself. The opportunity to explore a structural program, that by nature suggests freedom along with the ability to express the very moment of our time, thus presents itself. What is an artistic expression, if not a relentless challenge of reinventing the past in the present time? The need to reinvent the space that will house the artistic education and its communication to the public, is hence redefined.

The longitudinal axis of permeability is connecting the entrances of the two functions: the Educational Center of Arts and the Exhibition Center. This spatial element shapes up the idea into reality. The existing ground level difference permits the integration of the building’s base embodiment with the natural slope. A minor inclined ramp by 1.50m difference, is transporting smoothly the visitor from the level of the courts and outdoor athletic facilities, to the entrance of the Educational Center. A parallel ramp inside allows a natural flow towards the Educational Center entrance, achieving in that way an association with the Exhibition space. Both are linked as communicating vessels. Space, function and nature are dispersed into a fusion of conceptual and spatial ideas. The presence of these two entrances is made more apparent, by the existence of two outdoor squares. The one on the level of the courts, serves as an outdoor area of exhibitions and also as a transitional area towards the Exhibition Center, while the other has an altitude difference of 1.50m above the courts level, and is used to house a small cafe as well as a sitting area at a rather protected space underneath the shade of a shelter.
This longitudinal motion potentially continues to descend towards the artists’ studios, passing by an inclined open plan amphitheater. It finally leads to a submerged and protected from the school’s function -but embedded with nature- outside court for outdoor activities of the studios.

The linearity of this motion, or the “backbone” as described of the building, is emphasized visually as well as compositionally from the top floor that is displayed as if levitating from the static structure of the canopy- completing that way the structural program and the mandatory functions of the Educational Center, along with its tuition rooms of theoretic courses, as well as the large tuition halls for music and dancing.The use of natural Mediterranean lighting is absolutely crucial for this overall experience. The transparency of the building offers naturally lit spaces and tuition rooms, while allowing for connection with the rich nature of the “urban garden” of the Campus. Simultaneously with the use of a large skylight on the heart of the proposed building, running along the axis of motion, the natural light is ideally utilized to achieve a steady light dissipation throughout the day, which provides better demonstration conditions for the works of art during an exhibition. The use of the skylight, ultimately generates a luminous effect to unveil the compositional – structural elements of the building.

The same clarity of decision-making, is also apparent on the building’s structure of the proposal. The concrete core along with a series of steel columns and the large transparent glazing planes of the Southeast side, create the necessary privacy and serenity conditions similar to that of the surrounding athletic facilities. They contribute towards the creation of a structural entity to sustain the forces of the metallic canopy as an autonomous element that crowns the hole of the building mass. The structure is completed by four concrete elements, one on each edge of the canopy, that crosswise in pairs support its anchorage, while achieving the effect of it appearing as hanging, like a mere piece of silk fabric

Honourable Mention in architectural competition of Athens College and SYNNEON